Batteries are power. A world cannot really be imagined without them in all the powerful and smart electronics that empower our daily lives. But a more specific type of battery, the Lithium-Ion battery, has truly revolutionized the way we perceive technology. Over the past decades innovation in this field has accelerated the efficiency, power, safety and capability of these batteries that are found in everything from smartphones to households. Lithium and lithium-ion batteries provide portable electricity, with the main difference being that lithium is a primary cell (not rechargeable) offering higher capacity and density than lithium-ion, which is a secondary cell and can be charged over and over before becoming ineffective. Lithium battery technology has been instrumental in the drive towards a greener planet, with its lightweight, energy-dense and rechargeable properties making the batteries ideal candidates for the global electric vehicles market. The latest Nissan Leaf battery, for example, is claimed to use materials which can store a higher density of lithium-ion – meaning customers can drive an even greater distance in their new generation car.

However, imagine a world where lithium-powered consumer products can be created in any shape or size – as could the batteries that keep them running. This is currently not achievable on a commercial scale, mainly due to lithium-ion batteries only being available as a generic square or cylindrical shape and most devices – be they mobile phones, smartwatches or even electric vehicles – having to be built around the battery. This can often lead to wasted internal space and contribute to less than innovative exterior designs, given the limitations provided by a lithium-ion battery’s shape.

A team of researchers from Duke University in North Carolina are looking to revolutionize the world of lithium-powered devices with the idea of creating custom-sized lithium-ion batteries using 3D printing technology. A 3D printer would produce the electrolyte and two electrodes (the cathode and anode) in one process, compared to the current lithium-ion production scenario where the three elements are manufactured separately and combined inside a casing. They infused the polylactic acid with a mixture of ethyl methyl carbonate, propylene carbonate, and lithium perchlorate to obtain an ionic conductivity comparable to that of polymer and hybrid electrolytes. The result was a cutting-edge chemical ink mix which could enable 3D printing of complete lithium-ion batteries to any shape or size using low cost and widely-available fused filament fabrication (FFF) machines. A Celgard polymer separator was used in the device to improve the performance of the battery and demonstrate the ability to integrate 3D-printed battery technology with existing materials.After infusion and assembly, the bangle battery could power a green LED for approximately 60 seconds. 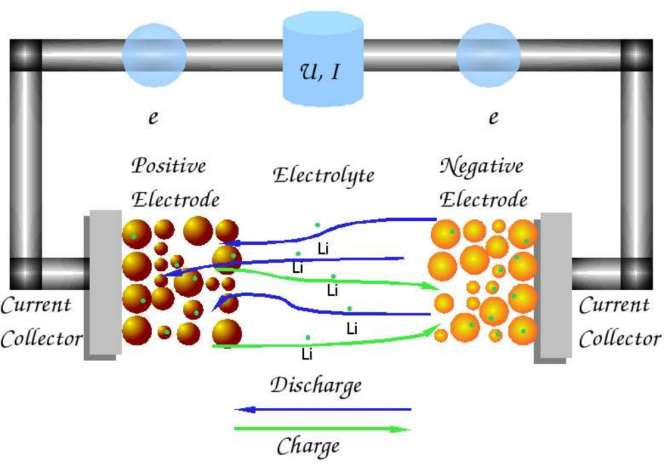 The team 3D-printed an LED ring complete with small lithium-ion battery particles where the anode and cathode were printed as freestanding curved electrodes which matched the contour of the bangle.According to the researchers, the capacity of the first-generation 3D-printed battery is about two orders of magnitude lower than that of commercial batteries, which begs the question, could we ever see 3D printed batteries in production?